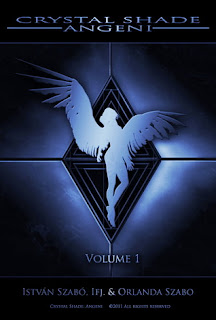 From Goodreads: "Seven year old Grace always dreamt of becoming a guardian angel; like  those who guarded and guided her people and prepared to bravely fight in a dreaded mythical event, the Crystal Shade – which never came. It's not like Grace ever wanted to see Demons. Or wants to know what evil and  darkness is – things that no one ever faced on her world and as the legends says, the Crystal Shade carries within –, nor does she want to die to be reborn as a guardian. But she thinks the mysterious life of angels is so noble, a fable that it sounds exciting – until it actually happens.

Crystal Shade: Angeni, Volume 1 explores the early life of a young daydreaming soul who is destined to reveal the forgotten past of her home world and to seek the answer for the eternal question; what the legendary Crystal Shade really is."

Firstly, thank you to Istvan Szabo for supplying me with an e-copy of the book for review. This does not, in any way, alter my review. All views expressed are my honest opinion.

I was excited to read this one, the name drew my interest as did the concept. The concept is not like anything I have read before which is very refreshing these days!

The cover is gorgeous! I really like it, I think it is unique and really drew my eye.

Crystal Shade is beautifully written with an almost historical feel to the book. The writing style is, in my opinion, more complex than other YA writers I have read. Which is both a good thing, and a bad thing. I found this a fairly slow read, it took a while for the action to really get going. I understand this is the start of  series, so there was world building to be carried out to set up for the future books!

The main character, Grace, is a young girl who would like nothing more than to become a Guardian, she loves her family and would do anything for them. Pretty early on in Graces journey she suddenly becomes a Guardian, just what she has always wanted. However, becoming a Guardian meant leaving her family forever. She has a new name, a new family and a new life.

The story is narrated by an elderly man telling a story to two children who are curious about the Crystal Shade. I'm not sure what the man and the children's roles are in the story, hopefully more will be revealed in the books to come!