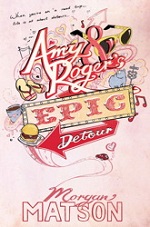 "Amy Curry thinks her life sucks. Her mom decides to move from California to Connecticut to start anew—just in time for Amy's senior year. Her dad recently died in a car accident. So Amy embarks on a road trip to escape from it all, driving cross-country from the home she's always known toward her new life. Joining Amy on the road trip is Roger, the son of Amy's mother's old friend. Amy hasn’t seen him in years, and she is less than thrilled to be driving across the country with a guy she barely knows. So she's surprised to find that she is developing a crush on him. At the same time, she’s coming to terms with her father’s death and how to put her own life back together after the accident. Told in traditional narrative as well as scraps from the road—diner napkins, motel receipts, postcards—this is the story of one girl's journey to find herself."

Where do I start with this one?! Ok to give you an idea, I started this book at about 10pm one night and I couldn’t tell you how many times I said to myself "just one more chapter, then I can sleep." I did try to put it down once, but after 20 minutes of not being able to get to sleep, I picked it back up. Well in the end I finished the book before I got any sleep. By the last few chapters I could barely keep my eyes open, but I just had to finish it. It probably doesn’t need to be said after that, that I loved this book. It was such a fun and easy read with characters I adored. First there is Amy, who recently lost her father in a car accident and has not been able to move on with her life. Amy hasn't been able to drive since the accident, insisting that it's her fault that her father is no longer with her, feeling so ashamed. Her family never talk about what happened, which began to eat Amy up inside. She can't find the joy in life anymore. Even through play's, she can't find the joy she once did when her Dad was alive.

Roger, a family friend of Amy's, has recently been dumped by his girlfriend and he doesn't understand why. Roger and Amy haven’t seen each other since they were young children who used to play together. It doesn't go unnoticed by Amy that Roger has grown up seriously cute. Roger is heading in the same direction and it's decided by the mothers that Roger will drive the car and Amy to her new house. Roger has been obsessing over his ex girlfriend, ringing her constantly but getting no answer. Since they are heading in the direction of his ex's house, he wants to take a detour to go see her. But there is a problem; Amy's mum has booked their trip down to a T. She has given them maps, booked their hotel stops and has given them a timeline. They leave with the intention of following the plan, this doesn't last for long. And this is where the real story begins. Amy and Roger's epic detour indeed, barely following a single stop that Amy's mother has planned. Along the way Roger cares less and less about his girlfriend and Amy finds herself enjoying life and coming to terms with her Father’s death. And of course Amy and Roger find themselves falling, for each other.

Amy was given a travel journal to record her trip, so throughout the book we see pictures of the places her and Roger go, as well as the playlists they choose to listen to. I loved this aspect of Morgan Matsons writing, as the story develops and the trip becomes even more of a detour you can see the change in Amy through the writings she keeps in her travel journal.

Overall I just loved this book. And it left me wondering when I will be going on a road trip as interesting as this one! Hopefully soon. I will definitely be reading this one again and again.