Hi fellow readers! It’s time for my first review! I picked Eon by Allison Goodman. I received this book as a gift from my friend for my birthday, so thank you to my namesake, Amy! 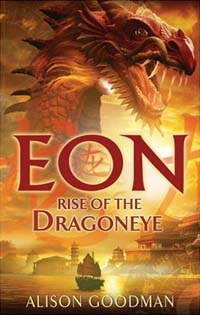 “In a world of lies, the truth can be deadly …
Under the harsh regime of an ambitious master, Eon is training to become a Dragoneye – a powerful Lord able to command wind and water to protect the land. But Eon also harbours a desperate secret – he is in fact a young woman living a dangerous masquerade that, if discovered, will mean certain death.

Brought to the attention of the Emperor himself and summoned to the opulent court, Eon is thrust into the heart of a lethal struggle for the Imperial throne. In this new, treacherous world of hidden identities and uneasy alliances, Eon comes face-to-face with a vicious enemy who covets the young Dragoneye’s astounding power, and will stop at nothing to make it his own.  Eon is based on the ancient lores of Chinese astrology and Feng Shui. It is a thrilling, timeless novel of deadly politics, sexual intrigue and dazzling swordplay set in a brilliantly envisioned world …”

Allison Goodman hit gold with this book, as far as I'm concerned. I loved it. I found it increasingly hard to put down. I just needed to know what would happen to Eon when her lie was uncovered, among the other events of the book. The book was just action packed with awesome characters. Of course we have Eon (Eona), the heroine of the book. Then we have her master, who would do anything (and I mean anything) to protect Eons secret and to help Eon become the new Dragoneye apprentice. There is Lord Ido, who wants to rule the land, and doesn’t care who he kills to get there. There is Dillon, Lord Ido’s Dragoneye apprentice and friend of Eon, not a good place to be! Lady Della is a personal favourite of mine, purely because she is in an almost similar position to Eon.

I had heard that there was no underlying love story in this book and prior to reading I was disappointed to hear so. On finishing the book, I can honestly say I didn’t once think that the story needed a love interest. I think it would have ruined the story line as well as severely complicating it. It is no secret to us, as the reader, that Eon is in fact Eona, a female. The entire way through this book I was fretting that she would be discovered and Lord Ido would punish her, or worse (even though I knew that there is a sequel, I couldn't help but worry!). I definitely was not expecting as many twists as there was in this book, which was a nice surprise. It's not often that I cant (atleast very loosely) predict where a story is going. But with this I was genuinely surprised, and on more than one occasion!

This is the first in a series and I cant wait to read the second book, Eona: The Last Dragoneye!

If you haven’t already read Eona, you should definitely look into it! As I already said, but feel the need to say again: I loved it! It reminded me loosely of the disney movie Mulan.